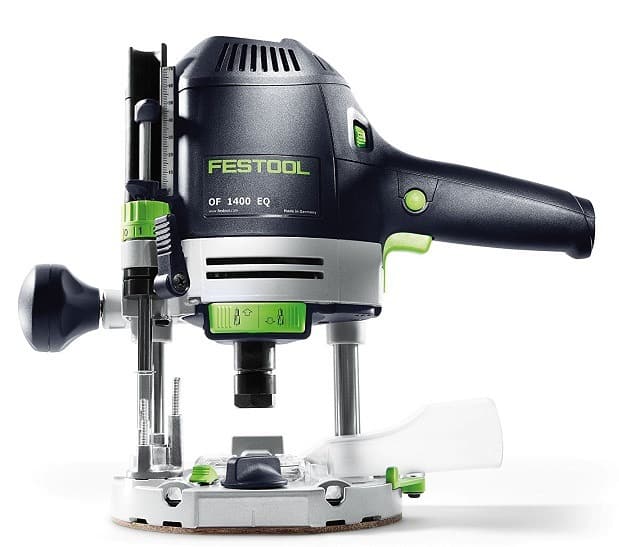 The ability of Festool OF 1400 EQ router

Versatility in any tool is as priceless as the tool in question. In fact rare to find in most tools. However, the Festool OF 1400 EQ wood router the nerve to be able to give the user the best experiences ever.  Of note is the fact that this is considered to be the most effective yet weighs less in real life.

The wide range of the router bits which the router can use is one not ever seen on most of the routers on the market. It has enough punch to be able to carry out the requisite operations in regard to the wood trimming.

Looking at the machine at its face value, the user would definitely love what he is seeing. For instance, some of the most outstanding features of the router include;

The ability of the OF 1400 EQ router to give a double clamping action which is quick and able to secure the plunge locks. This feature allows for precise and secure trimming.

with the router’s design, the user has the comfort of having a comfortable, better grip which is necessary for the best wood trims. In addition, this grip has been made with the sole aim of reducing the amount of fatigue which most of the users experience in using most of the routers.

The router has some of the best speed control switches which work at the slightest prodding by the user. This is the secret to the ability of this router to achieve the best of slices on the piece of wood. It is the innovative mind of the manufacturer that stands out. The router is known to experience less deflections because of its good lock up the system.

The router has a 1/256 ball detents meant for the precision. This is in most cases allowing for easy dialing of the router. However, the Festool has in most cases stressed on the manner of the depth adjustment features that have put the router on a pedestal. The router has an additional enhanced depth which is usually important when the router is to be used on some templates.

The router ids reputed for the use of the template guide whose centring has the sp[ace for some tool free insertions. the tool thus can operate independently of any other additions. the centre line indention will be additionally helpful in giving the user clear points through which to cut. power-among its compatriots, it is worth noting that it is easy to plug device which does not inconvenience its user with several complicated plugs in requirements.

The area of keeping the user healthy is quite fundamental. This is why the Festool has always installed the dust extractor on the routers they make.  This is also known to help reduce the amount of time that would be used in cleaning the router up. Another feature not common in most of the Festool routers is the chip deflector which is commonly used here to maximise the process of dust removal in some secluded areas which could have proven impossible.

The wood router as it is an important tool in the carpentry workshop. However, in some cases getting the best router is one way of ensuring that you only have what you need where your wood slices are concerned.

Because the Festool is predominantly known for their good routers, look their way. However, the liberal market allows for free choice which gives the user to look for alternatives in other areas. Consider the factors of your budget and the nature of the wood materials you are in need of slicing.

What is the Ideal Height for a Router Table?